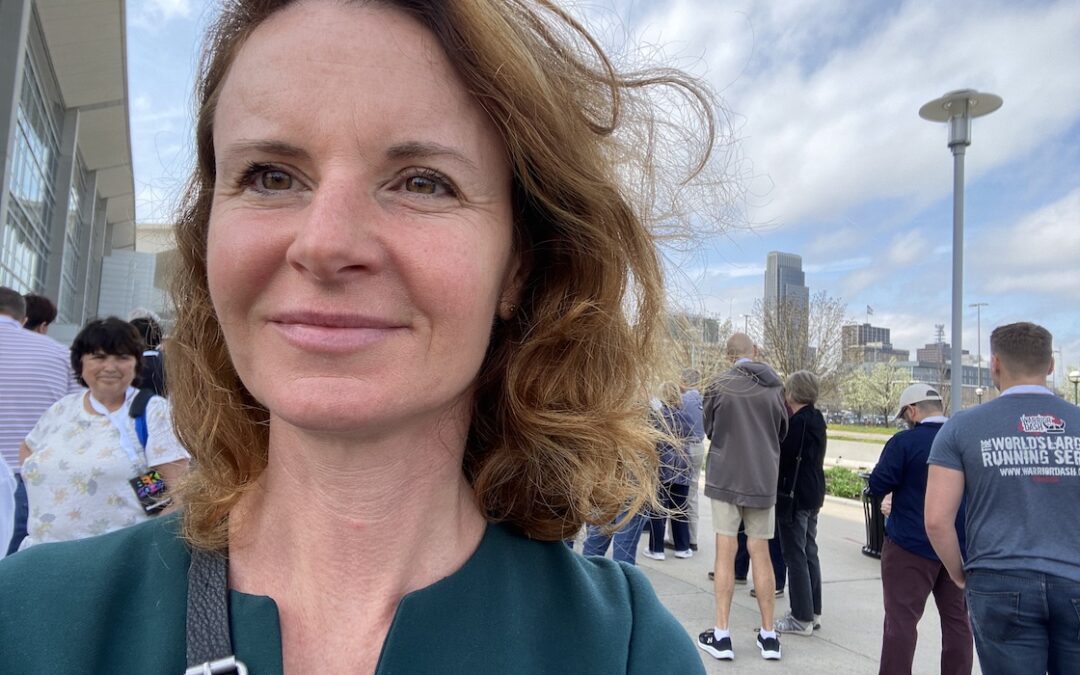 Every year in early May, over 30,000 shareholders travel to Omaha, Nebraska to hear Warren Buffett and his partner, Charlie Munger, answer questions.

But that’s not really what it is. As Charlie Munger said, it’s a party.

And it really is.

People look forward to it. They fly in days in advance, have meetups and dinners, and some even sleep in tents outside the convention center to get the best seat closest to the stage.

Middle-aged men show up in droves to learn about stocks – and about living the second half of life. Young men and women show up to ask about choosing a calling in life or how to be happy.

No question is too big or too small for Warren Buffett. He will answer them all with the same kind respectful attitude.

In this blog post, I’ll give you my 10 takeaways from this year’s meeting in Omaha.

1. There Is Only One Kind of Money

Warren Buffett presented slides with pictures of 20-dollar bills. He explained who had signed it, where it had been printed and what was written on it.

The first note, signed by Rosa Rios, read: “This note is legal tender for all debts, public and private.”

There is nothing coincidental about Warren Buffett sitting and reading the details of a 20-dollar bill aloud.

He explained that while you can go into a See’s candy store and try to buy chocolate with sacks of wheat, technically they might accept it if you bring enough, but money is easier.

However, wheat does not work with the authorities at all.

“Money is the only thing the IRS is going to take from you. It settles debt in the united states,” he said.

What was his point? Doesn’t everyone know that you can’t pay taxes with bags of farm products?

It’s his indirect warning against bitcoin and other cryptocurrencies. He says there is only one kind of money and that it’s the official currencies that are issued by the authorities.

But he also makes another point…

It’s important both for a company and for an individual to have enough cash.

In March 2020, we were really close to seeing a meltdown worse than the financial crisis (if you want to learn more about it, Buffett recommended the book Trillion Dollar Triage by Nick Timiraos).

“If the federal reserve hadn’t done what they did – in my view – in a short period of time, things could have stopped,” Warren said.

In such a situation, it’s important to have enough ready money to be able to pay your bills.

“We will always have a lot of cash on hand. We believe in having cash. There will be a few times in history where, if you don’t have it, you don’t get to play the next day.”

He compared cash to air.

“It’s like oxygen. It’s there all the time, but if it disappears for a few minutes, it’s all over.”

Buffett has been quite active during the first quarter.

On February 26, he said that not much happened. “We just don’t see anything.”

In the first three weeks of the year, they had only bought shares for $ 2.3 billion – mainly buybacks.

“It keeps us away from the bar. It’s something to do,” he said.

But at the end of February, the market dived, and he got busy.

He spent $ 41 billion in just three weeks in late February and early March.

Among other things, Berkshire Hathaway went on to acquire the investment company Alleghany Corporation, buy a 14 % position in the oil company Occidental Petroleum and buy a 9.5 % stake in the gaming company Activision Blizzard.

He was amazed at it being possible to amass a 14 % stake in Occidental Petroleum in just two weeks.

That could only happen because….

4. The Market Has Become a Giant Casino

When Warren Buffett was a young man honeymooning with Susan Buffett, they passed through Las Vegas, where they met acquaintances from Omaha.

Warren Buffett was surprised that people traveled so far to do something so “mathematically stupid,” as he calls it.

He turned to his young wife and said:

“I’m going to get very rich. If people are willing to do this… this is a country full of opportunities.”

Warren Buffett says the market, at times, is like a gambling parlor, and we see that happening right now. The market has become a giant casino where people do “mathematically stupid” things.

“Sometimes the market is investment oriented. Other times it’s totally a casino, a gambling parlor. That existed to an extraordinary degree the last couple of years,” Warren Buffett said.

Warren Buffett could buy 14 % of a large company in two weeks only because people trade and gamble as opposed to investing long-term.

Institutional investors in Occidental (like Blackstone) – who do not sell – already own 40 % of Occidental Petroleum. So it really means that Warren Buffett could buy a quarter of the available shares in the market in a short time. Buffett calls that “incredible”.

“It defies anything Charlie and I have seen, and we have seen a lot,” he said.

5. You Don’t Have to Be a Genius to Get Rich From Stocks

When people behave as if the market is a casino, it creates opportunities for Warren Buffett – and for you.

“We depended on mispriced businesses through these mechanisms. We’re not responsible for the mispricing.”

When you invest long-term in a market where people sell on rumors or an analyst’s write-up, opportunities arise.

“We learned a long time ago that it doesn’t take a high IQ. It just takes the right attitude,” Buffett said.

The right attitude is to find wonderful companies at reasonable prices and to keep the investment as an owner – not place it on the table as jeton.

You can read more about how to find wonderful companies in my e-book here.

Someone asked Warren Buffett how he has been successful at timing the market.

He doesn’t time anything, he said.

“We don’t have the faintest idea what the stock market is going to do on Monday,” he said.

Which is why Buffett and Munger never act on speculations.

“We have never said or done anything based on what we think the stock market is going to do – or for that matter what the economy is going to do.”

The method is to look at a company and assess whether it is a wonderful company and then find out what it is worth (again, learn more about this method in my e-book here).

“It’s amazing how hard people make how simple a game it is,” he said.

7. How to Make Yourself Inflation-proof

Yes, inflation is here. And it’s been in the cards for a while.

There are 2.2 trillion dollars – or 7,000 dollars per person in the United States – in circulation, according to the balance sheet of the Fed, Buffett explained.

Compare that with 10-15 years ago when that number was just 800 billion.

“When you put a lot of money in peoples hands and there are not a lot of goods, inflation rises,” he said.

Several people asked him how they should protect themselves against inflation. His response was a very simple piece of advice (and he dodged any inflation-proof investing advice).

He said you need to focus on becoming the best at what you do.

“If you’re the best doctor in town, they’ll bring chickens,” he said.

The point being that your skills are inflation-proof.

Berkshire Hathaway has very actively repurchased shares since the pandemic began in 2020.

Someone asked in him details about yardsticks for calculating the value of Berkshire Hathaway.

“There won’t be any formula but a principle,” Warren Buffett said.

The principle is that he makes share buybacks when it’s a better investment than buying shares in other businesses.

“We only buy back shares when it’s the most attractive thing to do,” he said (and by the way, Berkshire Hathaway made no share buybacks in April).

He went on to explain a bit about share buybacks. It really only means that as a shareholder, your piece of the company grows.

It’s not much different than if three people run a lemonade stand where one partner sells his part to the other two.

He gave another real life example from his portfolio.

Berkshire Hathaway has not bought shares in American Express since 1998.

Nevertheless, Berkshires stake has grown from 11.2 %. to 20 % since then – exactly because of that: American Express’ share buyback.

“It’s like owning a farm that constantly buys a little more of the neighboring farm,” he said.

The shares must be bought back at the right price though. If too expensive, buying back shares will be value-destroying.

“If you do it at the right price, there is nothing better than buying your own business back,” Buffett said.

Warren Buffett couldn’t help but say a bit more about bitcoin and other cryptos.

He explained that if a person in the audience offered him 1 % of all the farmland in the US, he would buy it on the spot for 25 billion dollars.

The same with 1 % of all apartments in the United States.

“But if you offered me all the bitcoins in the world for 25 dollars, I wouldn’t take it because what would I do with it? I have to sell it back to you one way or the other,” he said.

Farms produce food and apartments give you rent, but bitcoin doesn’t create anything.

If you owned all sorts of crypto and you couldn’t buy anything in the shops for them, they would be worthless (here we are back to his first point that the IRS only accepts dollars).

“That explains the difference between productive assets and something that depends on the next guy paying you more,” he says.

10. Learn, Let Yourself Be Surprised, and Become a Better Person

Warren Buffett showed the crowd an optical illusion drawing where the black part can represent two profiles looking at each other while the white in the middle can represent a vase – all depending on how you focus on it.

“You can go for years and be lost, and all of a sudden you see something different,” he said.

When he was a young man, learning about value investing was this kind of eye-opener, but he stresses that an eye-popping revelation can happen in any area and at any age.

Realizing how to be a better person is a lot more important than having insights about investing, because the second is just money, he said.

“You’ve had a chance to see how stupid you were in all kinds of things you did, why not have the second half of your life be better than the first half,” he said.

These kinds of discussions are among the best discussions between the two gentlemen’s interaction in Omaha. Like Warren Buffett explained, you’ll only make the second half better if you work at it.

“We have had enough sense to figure out what makes us happy and be somewhat more sensitive to what makes other people unhappy.”

Charlie Munger’s comment to that was: “I don’t even look at what I did when I was younger. It would embarras me.”

Warren Buffett is 92 and Charlie Munger is 98, and they share from their combined 190 years of life experiences.

Buffett said Munger has a simple trick to become a better human being. “Just write your own obituary and reverse engineer it.”

But Charlie Munger said he had an even better trick: Avoid death all together.

“Just tell me where I’m going to die, and I’ll never go there.”

Let’s hope they stay away from that place another year so we can meet up in Omaha next year and get even wiser about investing and life.