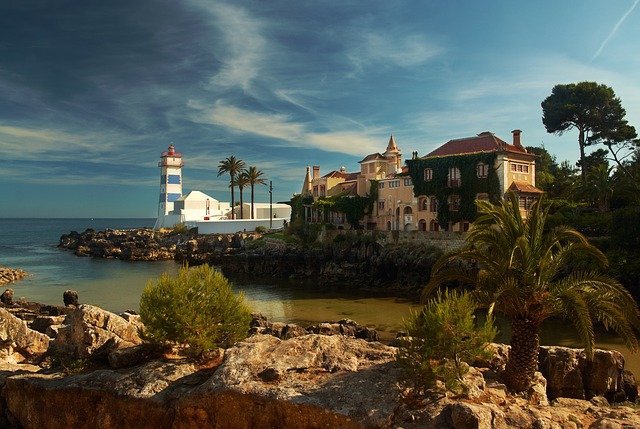 This blog post is a little more personal than usual.

It’s about my decision to move to Portugal.

Maybe you’re asking, what does it matter to me?

When I publicly announced that we’re moving, many asked, “Why Portugal?”

I decided to make it into a blog post because ultimately the decision is about being able to think outside the box and finding new ways to reach your goal.

How did it begin?

I didn’t know how to get through the day.

The global pandemic has been severe for many.

It’s also been difficult for our small family, even though no one we know became seriously ill.

Lockdown meant that I was cut off from friends and family.

I was isolated with two boys, who were 3 and 6 years old when the first lockdowns began.

I even had to let our cleaning lady go, as having to leave the apartment with the kids was problematic when there was nowhere else to go and it was cold out.

Small boys like to run, jump, and fight. The 81 m2 apartment felt very small and claustrophobic for the first time.

It had long been my plan to buy a townhouse close to the older boy’s school. But with the pandemic, the real estate market spiked and the town house I had been looking at went from costing less than USD 1.5 million before the first lockdown to costing between 2-2.3 million after.

So I ditched that plan.

I began researching buying a house in the Danish countryside.

There were beautiful historic houses selling for next to nothing. I could buy a manor in Lolland for the same price as my apartment.

But I knew very well that I would still wake up and wonder how to get through the day, because moving to the countryside would not make the winter go away and it would isolate us permanently.

The idea came from my business coach.

“You should move abroad,” she said.

I zoomed out geographically and started considering the whole world.

What about the United States? Most value investors live there.

What about Spain, where we’ve spent many happy holidays?

What about Australia, which I’ve always dreamed of visiting?

I started researching other countries and landed on Portugal.

There are six main reasons:

They issue special visas and residence permits to investors, entrepreneurs, and expats.

This means that there is a lively community that I can become a part of.

It’s not fun to move abroad if you’re going to be isolated there.

There are plenty of other Danes who live there and others who are in the process of moving there, and I’ve already had Zoom meetings with some of them.

I also regularly chat with other like-minded digital entrepreneurs from other countries who now live in Portugal.

2. There Are Good International Schools

My two boys will be 5 and 8 years old when we settle in Portugal in September 2021.

I wouldn’t move there if I didn’t think it would be a good place to grow up.

First, I researched international schools and applied for a handful.

The school choice has been the most research-heavy part of the decision so far.

They’ve been admitted to the absolute best school for their age group (it is a small school for younger kids only).

3. Portugal is a Safe Place

On various international lists, Portugal ranks as one of the safest places in the world.

Afghanistan is placed – perhaps not so surprisingly – at the very bottom as #163.

In Portugal, there is a low crime rate, a good healthcare system, and a friendly culture.

In other words, it’s a great place to grow up.

Safety is one of the reasons I didn’t choose moving to the US, even though I secretly feel that the blood in my veins is American (I grew up in a household with an American English speaker, and I studied in the US).

I get really sad at the thought of the boys having to go through a metal detector at the entrance to their school.

The United States ranks #121 on the World Peace Index. That’s just one spot above Burkina Faso.

4. The Cost of Living is Very Attractive

The cost of schooling will quadruple. But that’s not surprising as even the private Danish schools receive significant government funding.

Housing costs will multiply 10x, but we are also upgrading our lifestyle significantly and moving out of a city apartment in Copenhagen and into a house in an affluent suburb of Lisbon (I’m thinking Cascais or Estoril).

My estimate is that it’ll be around EUR 3,000 a month to rent a house.

However, taxes will be lower, and so will the general cost of living.

We won’t spend less money, but I’ll be able to support the lifestyle that I desire.

5. The Climate is Better

Living in Denmark, I sometimes feel like I live in Siberia.

Really. No kidding. When I’m biking my kids to school and I feel the snow, the hail, or the rain against my face, I get this vision of someone crossing a field in Siberia. It’s a humorous thought, but it also really describes what day-to-day life feels like in the winter.

You might be asking, “Why on earth is she biking her kids to school – and in rain, snow, and hail?”

That’s what we all do in Copenhagen.

Driving a car here would be impractical. There’s no place to park outside the school.

With the electric cargo bike, I can ride them right up to the gate.

The weather was part of the motivation for moving, so I quickly discarded possibilities like Switzerland, London, and New York.

When I researched which countries to move to, people suggested places like Thailand, Singapore, and Malaysia.

Portugal is around 1,500 miles from Denmark. It’s a 29-hour car ride and a 3.5-hour plane ride. It’s so close that we can easily travel back home for a wedding, funeral, or a birthday party.

It also means something to me that we’ve chosen a country in the European Union.

I’ve argued that the EU should be like the United States, where you can easily move to another state if you want to get a job somewhere else or just want a change of scenery.

I also considered New Zealand – really a good suggestion – but it’s too far from Denmark (it takes around 30 hours to fly there). I really don’t think friends would hop on a plane to visit us for the weekend.

What Can You Learn From This?

It’s about decision-making and thinking outside the box.

Many of the decisions we make are unconsciously tied to tradition or the expectations of others.

I once had a German boyfriend who was studying to be a doctor. He was so proud that in his family they had been doctors for 12 generations. I don’t even think he considered studying anything else.

He also took the same route to the hospital and bought the same cheese that his parents did.

Inside of them, there is a little voice saying,

Maybe Portugal isn’t the solution for you.

Maybe you are more into moving the countryside in the country you already live in.

Maybe it’s about something completely different.

The important thing is to look at what life you want to live and whether there is a shortcut to get there that you hadn’t noticed before.

Your money can take a shortcut when you learn to invest. You can download my e-book Free Yourself right here.